Difference between revisions of "Repository"

The source code of collectd is organized in a Git repository.

The official repository is available from:

To clone the repository use:

If you're more comfortable using Github you can use the mirror available there. Its web address is:

The public clone URL is: 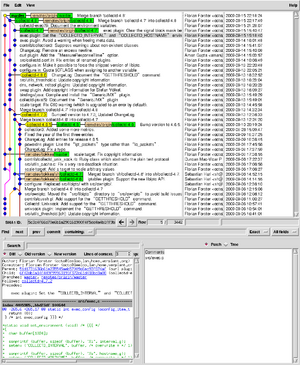 Screenshot of gitk in which the three branches are visible nicely. Also note the now defunct “collectd-4.6” branch near the bottom.

Bugfixes are applied to the earliest branch possible. If a bug existed for a while, this is probably the “bugfix1” branch. If the bug was introduced in the latest release (i. e. “collectd-4.8” currently), then the fix is applied to “bugfix0”. If the commit fixes a bug that has not yet been released or adds a new feature, it is committed to the “master” branch. From time to time, the “bugfix1” branch is merged into the “bugfix0” and the “bugfix0” branch is merged into “master”, so that bugfixes are included in all appropriate branches.

There are a couple of templates that make it easy to point to stuff in the repository.